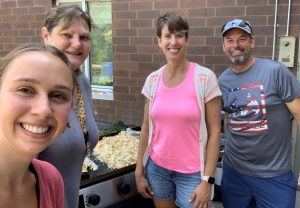 My journey with Stepping Stone started about five years ago, shortly after I returned from a Tony Robbins event in Las Vegas, Nevada. The course I was taking was called Business Mastery, and I signed up for this course because my business was struggling.

When I say struggling, that is probably a huge understatement. I own a catering business in the north metro and we bit off a lot more than we could chew when we moved into a 20,000 square foot event center. That move put the company on the brink of bankruptcy and it remained there for many years (we’re just now to a point where we have a little breathing room!).

I went to Tony’s week-long seminar because I needed some help getting my business on the right track. The most important thing I learned about my business was that it was on the wrong track because of me! My mindset and view of the world was making it incredibly difficult to grow a worthwhile business because I was stuck in scarcity and negativity.

“You can’t give what you don’t have.”

Tony spent much of the week talking to us about our personal mindset and psychology, and his most impactful statement was, “You can’t give what you don’t have.” That really struck a chord with me because I was not a giver back then, but I wanted to learn how. Tony said that if you don’t have money, you can’t give money. If you don’t have love, you can’t give love. So, I started thinking about how I could fill my bucket so I had more to give others.

It was during my walks from my hotel to the seminar each day, that I started to notice people experiencing homelessness as they begged for whatever they could get along the Las Vegas strip. Before this trip, I never really looked twice at these folks. I just couldn’t understand why they couldn’t get a job and support themselves.

During one walk, it hit me. How bad would things have to be in order for me to start begging complete strangers for money? I thought, even if I was physically capable of working, how bad would it have to be for me to forget my dignity and ask for money? What would be wrong in my life that would make me think that was a better way to get money than working for it?

So, I started giving those folks the benefit of the doubt and I started giving money when I had it. I even gave a hooded sweatshirt to a mother with two children who were begging on a pedestrian bridge outside the Cosmopolitan one evening.

When I returned to Minnesota, I started thinking about how I could give. You see, because my business was struggling, I didn’t have much money to give, and I don’t think that giving money to folks on the street is the best way to help. What I did realize that I had was time and I started looking for ways to give it away.

I have to tell you, going in that one day each week was the very best day of each week. For that three-hour block of time, I was out of my own head and my own problems, and fully engaged with serving others. I left each day with a smile on my face and a sense that I was making a difference in peoples’ lives.

“I wonder how many of the residents at Stepping Stone would change places with me in a heartbeat if they could?”

As time went on, my mindset began to change and I started seeing abundance and became optimistic about my life and business. I’d still catch myself from time to time feeling sorry for myself and my predicament. But, as I’d find myself on a pity party, the thought would creep in, “I wonder how many of the residents at Stepping Stone would change places with me in a heartbeat if they could?”

I mean, it’s all relative right? Here I am worrying about my first world troubles of whether or not my business can survive and am I going to be able to continue living in my huge house in the woods. I felt guilty for worrying about this when I knew our residents had worries that made mine look rather silly.

I began to change in many ways and my volunteering at Stepping Stone took on a new flavor. I started spending more time with residents one on one and listening to them and their concerns. I began helping with the Jobs Club and mentoring residents on how to write resumes, dress for interviews, and how to answer interview questions.

When the Jobs Club stopped, I moved into Coaching with Jeff where each Tuesday I’d make myself available to any resident who wanted to talk to me and get feedback on their plans for self-sufficiency. Some weeks I’d have one or two, some five or six, and other weeks no one would show up for these coaching sessions. I’d also make myself available to meet with them at other times that were convenient for their schedule. I could feel like I was making a difference in their lives just by being there with them and it felt great!

I didn’t have money to give to Stepping Stone then, but what I did have was time and presence. I could give my time and my presence to help make a difference in people’s lives. I can tell you that it made as much of a difference in my life as it did anyone else’s.

If you’re looking for a way to change the way you look at the world. If you want to feel better about yourself. If you want to experience the satisfaction that comes with making a difference in the lives of others, consider becoming a volunteer and serving others.

I cannot imagine anyone regretting helping another human being in their time of need.